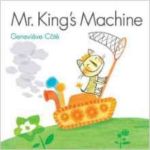 When Mr. King the cat discovers that one of the pretty flowers near his home has been chewed by a caterpillar, he is NOT happy. He decides to build himself a Caterpillar-Catcher to track down the culprit who did it.

These are dark times for a small mouse. A new invention—the mechanical mousetrap—has caused all of the mice but one to flee to America, the land of the free. But with cats guarding the steamships, trans-Atlantic crossings are no longer safe. In the bleakest of places the one remaining mouse has a brilliant idea. He must learn to fly!

Danny’s parents have always been a bit flaky, but this time they have gone too far! Their latest plan to follow their dreams means Danny and his older brother will spend six months in Banff (wherever that is) and six months in New York City. Furious, Danny runs out of the house and straight into a very, very large hole. When it appears that help is not on the way, Danny becomes a subterranean Robinson Crusoe, creating shelter (garbage bag and paper clips), cereal (coffee creamer, rainwater, granola bars, and a few rogue raisins), and a washroom (a hole in a hole). 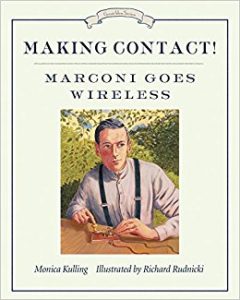 As a boy, Marconi loved science and invention. Born in 1874 in Bologna, Italy, to a wealthy family, Marconi grew up surrounded by books in his father’s library. He was fascinated with radio waves and learned Morse code, the language of the telegraph. A retired telegraph operator taught him how to tap messages on the telegraph machine. At the age of twenty, Marconi realized that no one had invented a wireless telegraph. Determined to find a way to use radio waves to send wireless messages, Marconi found his calling. And, thanks to his persistence, on December 12, 1901, for the first time ever, a wireless signal traveled between two continents.

In 1852, when seventeen-year-old Katharine is sent to her family’s estate to prove that her uncle is insane, she finds he is an inventor whose work creating ingenious clockwork figures supports hundreds of families, but strange occurences soon have her doubting her own sanity.

To the dismay of his parents and friends, a prehistoric boy continually thinks of making things softer, warmer, and nicer, rather than being content in a world of stone.

This fictional journal is from the year in which Galileo constructed his own telescope and began to record his astronomical discoveries. Includes additional nonfiction biographical information.

The true story of Joseph-Armand Bombardier’s journey to invent the snowmobile.