On the day the tsunami strikes, Kai loses nearly everyone and everything he cares about. But a trip to New York to meet kids whose lives were changed by 9/11 gives him new hope and the chance to look for his estranged American father. Visiting Ground Zero on its tenth anniversary, Kai learns that the only way to make something good come out of disaster is to return and rebuild.

Eleven-year-old Ema has always been of two worlds–her father’s Japanese heritage and her mother’s life in America. She lives in Japan and has spent summers in California for as long as she can remember, but this year she and her mother are staying with her grandparents in western Tokyo as they await the arrival of Ema’s baby sibling.

After a devastating tsunami in Japan, cousins Jet and Kai spend the summer together in Astoria, Oregon, training for the Young’s Bay Treasure Island Race and become close friends in the process.

Antonio feels lucky to have found a good job as a messenger, where his richly blended cultural background is an asset. Through his work he meets Wing, a young Chinese fruit seller who barely escaped the anti-Asian riots in San Francisco, and his sister Fan, a talented singer. With injustice all around them, the three friends are determined that violence will not be the only way to gain liberty.

The son of a Jewish father and black mother, high school senior Zack has never been allowed to meet his mother’s family, but after doing a research project on a former slave, he travels from his home in Canada to Natchez, Mississippi to find his grandfather. 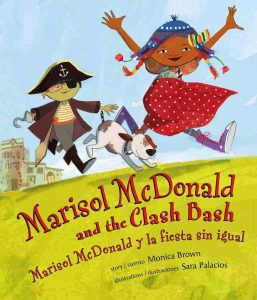 A multiracial, bilingual girl plans a birthday party and hopes her abuelita (grandma) will be able to come from Peru to join the celebration.

Scotch has never quite fit in.  With her white Jamacian father and black Canadian mother, she doesn’t belong with the Caribbeans, white, or blacks.  Though recently she feels different for stranger reasons–her skin is being covered in spots of black stickiness that won’t go away no matter what she tries.  Not to mention that she sees floating, bodiless horse heads that no one else can.  But soon Scotch has even bigger problems.  She’s out for a night with her brother when a bubble of light appears.  Scotch dares her brother to touch it.  He does, and then he disappears.  A moment later a volcano emerges in Lake Ontario, and all Toronto is invaded by the Chaos.  Scotch is desperate to find her brother, but she doesn’t know where to begin searching in a city gone mad.  Mythical cretures sush as Sasquatches are walking down the streets, and ordinary peope are transforming in truly weird ways.  Scotch herself is getting blacker and blacker.  Can she find her brother before she becomes completely unrecognizable?

Renowned author Nalo Hopkinson mixes fantasy and Caribbean folklore in this rollicking story of identity and self-acceptance in a world given over to Chaos.

After learning that there are werewolves in his city, a sixteen-year-old is even more surprised to discover the identities of the hunters who drove them out decades earlier, but he soon infiltrates the Wolves gang to help destroy them for good.

After a classmate commits suicide, Kana Goldberg—a half-Japanese, half-Jewish American—wonders who is responsible. She and her cliquey friends said some thoughtless things to the girl. Hoping that Kana will reflect on her behavior, her parents pack her off to her mother’s ancestral home in Japan for the summer. There Kana spends hours under the hot sun tending to her family’s mikan orange groves.Kana’s mixed heritage makes it hard to fit in at first, especially under the critical eye of her traditional grandmother, who has never accepted Kana’s father. But as the summer unfolds, Kana gets to know her relatives, Japan, and village culture, and she begins to process the pain and guilt she feels about the tragedy back home. Then news about a friend sends her world spinning out of orbit all over again.