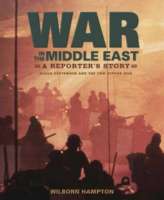 In 1970, when the Jordanian civil war known as Black September began, U.P.I. correspondent Wilborn Hampton was sent to report on unfolding events. Holed up in the InterContinental Hotel and caught in the crossfire, he managed to get the story out. Three years later, dispatched to Israel to cover the Yom Kippur War, the reporter took it on himself to drive to the front lines.

In this groundbreaking memoir set in Ramallah during the aftermath of the 1967 Six-Day War, Ibtisam Barakat captures what it is like to be a child whose world is shattered by war. With candor and courage, she stitches together memories of her childhood: fear and confusion as bombs explode near her home and she is separated from her family; the harshness of life as a Palestinian refugee; her unexpected joy when she discovers Alef, the first letter of the Arabic alphabet. This is the beginning of her passionate connection to words, and as language becomes her refuge, allowing her to piece together the fragments of her world, it becomes her true home.

When she finally joins her father and brothers in their new home in Switzerland, a twelve-year-old Turkish girl encounters the tremendous difficulty of living in a foreign country without knowing the language and customs.

During the Israeli occupation of Ramallah in the West Bank of Palestine, twelve-year-old Karim and his friends create a secret place for themselves where they can momentarily forget the horrors of war.

Determined to follow the laws set down in the Qur’an, 17-year-old Nadia becomes involved in a violent revolutionary movement aimed at supporting Muslim rule in Syria and opposing the Western politics and materialism that increasingly affect her family.

As 13-year-old Azad tries desperately to cling to the life he has known, the political situation in Iran during the war with Iraq finally forces his family to flee their home and seek safety elsewhere.

Sister Shako, an old woman whose family was killed in a vendetta, lives with her goats in eastern Turkey. She asks for shelter from Dalokay’s father who was the landlord of the village. The young boy’s friendship with the old woman flourishes with daily visits.

Ziba came on a boat. Sitting in the crowded hull, with her mother’s arms around her, Ziba remembers all that she has left behind. They hope to find peace and safety in a new land, but where will their journey end.

This book made in-depth look at the peoples and laces of this diverse and fascinating region-from the cradle of civilization to the powerful countries that playa central role in today’s global economy and politics.