Aristotle and Dante continue their journey to manhood in this achingly romantic, tender tale set against the backdrop of the AIDS epidemic in 1980s America. In Aristotle and Dante Discover the Secrets of the Universe, two boys fell in love. Now they must learn what it means to stay in love-and to build their relationship in a world that doesn’t seem to want them to exist. In their senior year at two different schools, the boys find ways to spend time together, like a camping road trip they take in the desert. Ari is haunted by his incarcerated older brother and by the images he sees on the nightly news of gay men dying from AIDS. Tragedy feels like his destiny, but can he forge his own path and create a life where he can not only survive, but thrive?

Chinelo, or Nelo as her best friend Kate calls her, is all about her neighborhood Ginger East. She loves its chill vibe, ride-or-die sense of community, and the memories she has growing up there with her friends. Ginger East isn’t what it used to be though. After a deadly incident at the local arcade, most of her friends’ families moved away. Kate, whose family owns the local corner store, is still there and as long as that stays constant, Nelo’s good. When Kate’s parent’s store is vandalized and the vandal still at large, Nelo is shaken to her core. And then the police and the media get involved and more of the outside world descends upon Ginger East with promises to “fix the neighborhood.” Suddenly, Nelo finds herself in the middle of a drama unfolding on a national scale. Worse yet, Kate is acting strange. She’s pushing Nelo away at the exact moment they need each other most. Now Nelo’s entire world is morphing into something she hates and she must figure out how to get things back on track or risk losing everything–and everyone–she loves

In 25 distinct styles from some of the most exciting comic artists, Noisemakers makes for great Women’s History Month reading and is perfect for everyone who is not afraid to use their voice and for those who could use a little boos

The story of a child confronting a man-eating giant or witch is told the world over. These heroes go by many names and might be normal in size or no bigger than a thumb. Though they’re often scorned for being the youngest and smallest, they’re well-armed with cleverness and courage. In this companion to Glass Slipper, Gold Sandal, Newbery Medal winner Paul Fleischman and illustrator Julie Paschkis combine elements of this story from different traditions Jack and the Beanstalk, Tom Thumb, Kihuo, Vasilisa to create one narrative, one complete picture of a small boy’s triumph.

Once a year, Abuelo comes from Mexico to visit his family. He brings his guitar, his music―and his memories.

A young girl who wears a wooden bowl over her face to hide her beauty overcomes a variety of trials and eventually finds love, riches, and happiness. 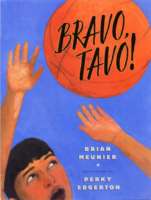 Tavo, named for his father Gustavo, plays basketball so much that his sneakers are worn out. His father is too worried about the drought afflicting their small village to focus on replacing them. Gustavo thinks he can solve the water shortage, but the other villagers say he’s crazy. Tavo puts aside basketball to help prove his father right. In return, something miraculous happens to his sneakers, and he’s the hero of the next game. Did the magic come from his shoes, or was it in his heart all along? Brian Meunier’s outstanding storytelling makes this a captivating read-aloud, while Perky Edgerton’s extraordinary paintings make it a visual treat.