The Holloway crew, having made it to the Natural History Museum barely alive, continues to seek a cure for the Disease but when the children return to the streets for medical supplies, it is no longer clear who–or what–is their enemy. 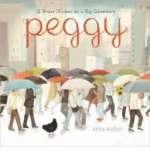 Peggy, a hen, has a life-changing adventure when a gust of wind drops her in a big city. 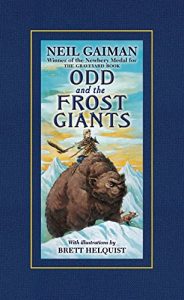 An unlucky twelve-year-old Norwegian boy named Odd leads the Norse gods Loki, Thor, and Odin in an attempt to outwit evil Frost Giants who have taken over Asgard.

In this fairy tale, loosely based on English and Scottish lore, feisty Princess Rosamond, who prefers good books to good looks, risks her throne and all her wealth to save her father’s life.

When Liam hears a loud roar in the middle of the night, he must use all his ingenuity to protect his sleeping mother from a hungry bear.

In the ruins of a place once known as North America lies the nation of Panem, a shining Capitol surrounded by twelve outlaying districts. The Capitol is harsh and cruel and keeps the districts in line by forcing them all to send one girl and one boy between the ages of twelve and eighteen to participate in the annual Hunger Games, a fight to the death on live TV. Sixteen-year-old Katniss Everdeen, who lives alone with her mother and younger sister, regards it as a death sentence when she is forced to represent her district in the Games. But Katniss has also resolved to outwit the creators of the games. To do that she will have to be the last person standing at the end of the deadly ordeal, and that will take every ounce of strength and cunning she has.

Despite the urgings of her well-meaning parents, a self-sufficient Polish girl insists she’ll never marry unless she meets a man who is as reliable as her broom.

Your favorite little polar bear in a BIG board format.  What makes Lars, the little polar bear, so special?  Stories that “incorporate the unexpectedness of life events, the power of experiences to help form personal values, and the importance of both friendly help and self-reliance.” (School Library Journal)  Now available as a 9×9 “lap edition” board book!