Twins Chirri and Chirra venture underground to explore a hole that has appeared in their basement wall and there encounter all manner of creatures and delights.

When a humble farmer named Pong Lo asks for the hand of the Emperor’s beautiful daughter, the Emperor is enraged. Whoever heard of a peasant marrying a princess? But Pong Lo is wiser than the Emperor knows. And when he concocts a potion that saves the Princess’s life, the Emperor gladly offers him any reward he chooses except the Princess. Pong Lo makes a surprising request. He asks for a single grain of rice, doubled every day for one hundred days. The baffled Emperor obliges only to discover that if you’re as clever as Pong Lo, you can turn a single grain of rice into all the wealth and happiness in the world! 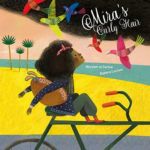 Mira doesnt like her hair. It curls at the front. it curls as the back. It curls everywhere! She wants it be straight just like her mama’s. But then something unpredictable happens… and Mira will never look at her Mama’s hair the same again!

Teenaged best friends Tianyi and Kai journey deep below a mountain range, where ancient tombs are certain to contain riches but are rumored to be guarded by merciless supernatural forces.

Farmer Falgu’s trips never go smoothly. In the fourth book of the popular series, he is on his way to the annual kite-flying festival with his daughter, Eila. But…. Whoosh! She loses her kite to the strong wind. Will our clever Farmer Falgu come up with a solution to make his daughter happy? Chitra Soundar’s beautiful tale is complemented by Kanika Nair’s colorful illustrations that bring alive the kite flying festival of Rajasthan. 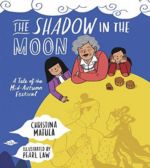 Two young sisters celebrate the Mid-Autumn Festival, admire their mooncakes decorated with a picture of a lady in the moon, and listen to their Ah-ma tell the ancient tale of how the holiday began.

Four determined homeless children make a life for themselves in Chennai, India.

The incredible true story of the twelve boys trapped with their coach in a flooded cave in Thailand and their inspiring rescue.

Accused of stealing the god of love’s bow and arrow, Aru has ten days to find the real thief or risk being kicked out of the Otherworld.