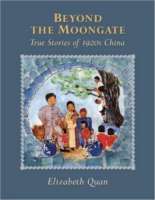 MOONGATES DOTTED THE LANDSCAPE OF OLD CHINA. Ancient Chinese architects had sculpted stone piled on sculpted stone to form round doorways, with the spiritual symbolism of the full moon. To step through one of these doorways was to step into a world of peace and happiness….

And so it was in the 1920s that the Lee King family – father, mother, and six children, aged ten months to seven years – traveled from their home in Canada, across the Pacific Ocean, to inland China. There, they had the opportunity to step beyond the moongate into a land not yet touched by modern warfare or political unrest.

The story of the moongate, tells of the two “golden” years the family spent with Grandmother in a remote village in the south, which hadn’t changed for centuries.

Step inside and live the long lazy days of a China forever gone. The moongate beckons….

The White Bicycle is the third stand-alone title in the Wild Orchid series about a young woman with Asperger’s Syndrome. This installment chronicles Taylor Jane’s travels to the south of France where she spends a summer babysitting for the Phoenix family. Including flashbacks into Taylor’s earliest memories, along with immediate scenes in Lourmarin, a picturesque village in the Luberon Valley, The White Bicycle results in a journey for independence both personal and universal, told in Taylor’s honest first-person prose.

When she returns home after two years, Fever finds that her Scriven mother’s creation, New London, the city on wheels, is nearly complete and ready to fight the nomad tribes of Britain–and Fever must journey to the north to find the ancient birthplace of the Scriven mutants and solve the mystery of her own past.

In the turbulent world of the Mediterranean Bronze Age, Hylas, a lowly twelve-year-old goatherd, thief, and outsider, journeys from the Greek mountains to Crete and Egypt, making allies with animals, battling tyranny, and withstanding the elemental powers of the gods of land and sea.

In The Son of Neptune, Percy, Hazel, and Frank met in Camp Jupiter, the Roman equivalent of Camp Halfblood, and traveled to the land beyond the gods to complete a dangerous quest. The third book in the Heroes of Olympus series will unite them with Jason, Piper, and Leo. But they number only six–who will complete the Prophecy of Seven? The Greek and Roman demigods will have to cooperate in order to defeat the giants released by the Earth Mother, Gaea. Then they will have to sail together to the ancient land–Greece itself–to find the Doors of Death. What exactly are the Doors of Death? Much of the prophesy remains a mystery. . . . With old friends and new friends joining forces, a marvelous ship, fearsome foes, and an exotic setting, The Mark of Athena promises to be another unforgettable adventure by master storyteller Rick Riordan.

Moomintroll encounters a mouth-organist, a moth collector, and a lovely maiden, and discovers the danger of a threatening comet when he takes a journey to seek advice from the Professor.

A boy and a mouse take a bumpy sea journey to the majestic expanses of the Antarctic, where they see the sights and meet new friends.

Newbery Medalist Cynthia Rylant joins naturalist painter Lambert Davis to create a vibrant picture book that follow the migratory journeys of some magnificent creatures: locusts, gray whales, American silver eels, monarch butterflies, caribou, and terns. Rylant’s lively, poetic prose and Davis’ exquisite, dramatic paintings offer an awe-inspiring look at the animal world and the outstanding tests of endurance and strength that the animals have undergone for centuries, and which continue to cycle on and inspire us today. 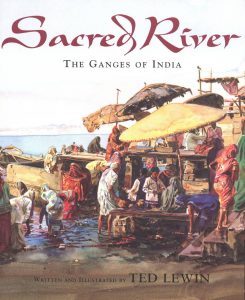 With the help of colorful, detailed watercolors, Ted Lewin tells of his amazing experiences among the Hindu pilgrims who journey annually to the Ganges river, the most sacred in India.

Mary O’Hara is a sharp and cheeky 12-year-old Dublin schoolgirl who is bravely facing the fact that her beloved Granny is dying. But Granny can’t let go of life, and when a mysterious young woman turns up in Mary’s street with a message for her Granny, Mary gets pulled into an unlikely adventure. The woman is the ghost of Granny’s own mother, who has come to help her daughter say good-bye to her loved ones and guide her safely out of this world. She needs the help of Mary and her mother, Scarlett, who embark on a road trip to the past. Four generations of women travel on a midnight car journey. One of them is dead, one of them is dying, one of them is driving, and one of them is just starting out.